Where in the Constitution is the separation of church and state?

Christine O’Donnell shows her knowledge or lack thereof of the Constitution in a debate today. She asked opponent Chris Coons, “Where in the Constitution is the separation of church and state?” The quote starts at 2 minutes and 50 seconds in the video above.

While the constitution does not state “separation of church and state”, the First Amendment makes it pretty clear:

Congress shall make no law respecting an establishment of religion, or prohibiting the free exercise thereof; or abridging the freedom of speech, or of the press; or the right of the people peaceably to assemble, and to petition the Government for a redress of grievances.

The show starts with a somewhat irreverent discussion of the Chilean miner’s rescue, with Jeff and Glenn praising the relief efforts, but wondering if they would be left behind because of, well, their, um, excessive body mass. At the 7-minute mark, they dive into a serious discussion of how this scenario might play out in the US political system, and why the BP spill isn’t making waves in the 2010 election. A very interesting discussion ensues about the themes of the 2010 race, and how they’re playing in various races, with, typically, Jeff and Glenn taking different tacks on the same theme, but working to understand each other. At the 45-minute mark, Jeff and Glenn discuss the recent federal ruling on Don’t Ask Don’t Tell, and its impact on the election. They explain how this decision puts the President in a political box, and what was once a winning issue for a major constituency of his is now a lose-lose scenario. They close by unveiling a new “store” on their site, featuring PoliTalk tee shirts, sweatshirts and other gifts. 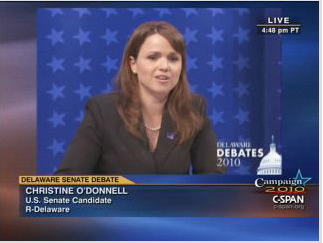 In what seems to be a weekly occurrence, yet another gem has been given to Democrats from the treasure trove of Christine O’Donnell statements from the past. This week, and audio clip from a 2006 debate O’Donnell participated in surfaced. In it O’Donnell claims that she has classified information that China is planning to take over the US. When pressed on whether she has a security clearance to get classified information, she explains that the information was from various non-profit groups.

A couple of things:

What get’s O’Donnell into trouble is the fact that she shoots from the hip when she speaks. This is why you don’t see here with many public appearances or interviews now.  Less is more form a campaign point of view. She says things without thinking first. We all do this from time to time. She does it a lot. In the debate, she could have made the point about China without the “classified” bit and may have been able to say now that in 2006, I claimed that China was looking to take over the USA… now they own most of our debt. But alas, she did not. As a result, she provides lots of fodder for the media and this humble blog.

I’m looking forward to next week.

P.S. Christine, I love your smile!

Is Christine O’Donnell’s new ad bizarre or brilliant? Is it reminiscent of Richard Nixon’s “I am not a crook” or Ronald Reagan’s Morning in America spot? Jeff explains how this ad is a metaphor for how the Republicans have gone off-track, and why they peaked too soon, and why it would have been better for them to do something, anything, rather than simply be the party of no and rest on the cult of personalities, that as of late have turned sour, weakening their brand. The hosts then launch into a discussion of the difference between campaigns to persuade and campaigns to organize, and how that’s playing into the minimum wage debate. At the 32 minute mark, Glenn and Jeff launch into a spontaneous debate on the constitutionality of the minimum wage, and they close the show at the 49 minute mark with a hilarious discussion of the Fox News story on the Los Angeles Police spending $1 billion on Jet Packs. Sad, but true, Fox News was duped.

What can I say? I love this ad. It has that familiar music that reminds me of my favorite PC/Mac ads that Apple does. It shows the candidate with soft and comfortable lighting. Heck, she is even wearing pearls (remember Beaver’s mom?). This is what a political consultant does when they have very little to work with, and it can be very effective.

Well then, create an ad that side-steps the issues, says nothing of substance and plays to voter frustration of the incumbents. Absolutely brilliant!

By the way, have you ever thought that a candidate would start their own campaign ad with “I’m not a witch”? I think she just lost the vote in Salem, Massachusetts, but I still love this ad!

That’s it, I need to watch it again.