Episode 75 – Fair Tax to the Rescue

A liberal supports the idea of a Fair Tax, Obama supports the idea of oil drilling off the east coast and in Alaska, and a Republican may actually support Cap & Trade legislation. It’s a week where politics gets twisted around — where cat people and dog people may actually get together!  A significant portion of the show is spent discussing an idea proposed by a caller who supports the “Fair Tax.” Our resident experts take on the tax system, but explain why politics, money and power stand in the way of any meaningful reform. They also talk about the politics of President Obama’s proposal to open up oil drilling in waters off the East Coast and in Alaska. Jeff, upset by this announcement, foreshadows potential trouble with those in the Progressive movement who already lost out on the public option in health care reform and may now lose out when it comes to meaningful environmental legislation. Will the Progressives stay home in  November, or will the chance to have any kind of environmental legislation bring them out to vote in the fall?  Glenn explains why the drilling is a good idea and may actually engender true bipartisan support — the key being South Carolina Republican Sen. Lindsay Graham. They close the show by highlighting a few key Senate races — in New Hampshire, Pennsylvania and Arizona. They both break with the conventional wisdom and explain why Sarah Palin’s presence at John McCain’s rally was a complete disaster.

Check out and join the following:

Specific links used in this show:

Episode 31 – GM Driven to the Brink

What we have in GM and its bailout is a failure of imagination, a failure to communicate and a failure of execution. At PoliTalk, we keep our egos in check, but we take pride in bringing our substantial experience in politics and business to bear in communicating what’s really going on in Washington, and what it means for us. To this end, kudos to Glenn for predicting exactly what happened this weekend with GM months ago. In this episode, Glenn continues to call for GM to go into bankruptcy. Jeff and Glenn also speak passionately about the double standard being applied, where auto execs get fired and workers are asked to renegotiate their contracts, but financial services execs keep their jobs, and their bonuses, and we’re told their employees get to keep their bonuses because they were under contract. They also explain why Alberto Gonzolez won’t be traveling to Spain anytime soon, and why Sarah Palin may not be including John McCain on her Christmas Card list. Get the real scoop here on PoliTalk: the place where political insiders come to get the outside the beltway view on how their politics and policy gets traction, and where those on the outside come to get a real inside view on politics and policy in Washington. Always informative, entertaining and authentic, it’s  PoliTalk, featuring Glenn Gaudet and Jeff Kimball — two seasoned political and business pros.

And the Winner is… 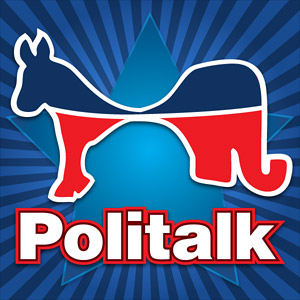 On this Election 08 eve, Glenn and Jeff offer their predictions, and their own insights into how to look at results election night. John McCain’s first positive TV ad features…Barack Obama? Are you kidding? Did you wonder who would be on the final Meet the Press before the election? Maybe Sarah Palin or Joe Biden? Did you miss it? Glenn and Jeff gleefully re-enact their own Shakespearean drama: Fred Thompson meets Tom Brokaw.  Note to Central Casting: send a bottle of No-Doze to the fellas at PoliTalk. Oh, and they have an interesting little discussion about re-writing a provision in the Constitution of the United States. And Glenn passionately weighs in and boldly declares that he’s going to vote for… It’s all right here in Episode12 of PoliTalk.

McCain Shows up on Letterman

The long awaited appearance of Senator John McCain on the Late Show with David Letterman.

Episode 9: Is the Religious Right for McCain?

With McCain’s campaign suffering from political schizophrenia, Jeff and Glenn channel Freud and put the situation on the couch, dissecting  the “right” side of the brain, a tenuous and incomplete alliance with the conservative religious evangelicals vs. the left side of the campaign’s brain, the more socially libertarian and fiscally conservative. In breaking down the campaign, Jeff and Glenn review the following:

And finally, the most important question of all… Why aren’t Jeff and Glenn hosting a morning talk show yet?  Today’s broadcast of Morning  Joe on MSNBC practically brought the co-hosts to blows — it was more uncomfortable than watching a McCain-Obama debate. Talk about cranky.  Tell us how you think we can make this happen — we’re asking for your help in promoting our show to your friends and family — and give us some ideas for the show’s name…something other than Glenn and Jeff  in the morning…

This is your wake up call, America. A new day is dawning and it’s time to get moving.

McCain Blames Democrats For Bailout… or Not

Senator McCain, did the Straight Talk Express get a flat tire?

Here is an ad that you put out this week on the Bailout:

Then, here is what you said to ABC this week:

Which is it? Are you placing blame or not? –Glenn